All first-year students will receive a copy of the book from the university as soon as it’s published in October. Brandon will visit campus to speak to students as part of St. John’s Academic Lecture Series on November 5.

Students are participating in a campus-wide social media campaign, ‪#‎HumansofSJU‬, on Twitter and on Facebook, “designed to spotlight the unique qualities that distinguish those who study, teach, and work at St. John’s University. It is patterned after the popular ‘Humans of New York’ series. By showcasing these individuals, we will provide the community at large with a deeper understanding of the people and values that make our University what it is today.” 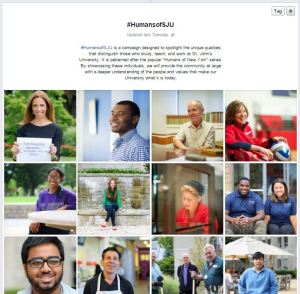 Click here to read about the “Humans of St. John’s University”

#HumansofSJU is a campaign designed to spotlight the unique qualities that distinguish those who study, teach, and work…

Based in Queens, New York City’s largest borough, St. John’s is a medium-sized university where 70% of the diverse student body comes from New York state. HONY: Stories is an exciting, creative common reading pick that will help students put into perspective the enormous city that surrounds their school.

And, as Brandon Stanton has demonstrated since he started his photoblog in 2010, HONY’s relevance and appeal extends far beyond New York City’s limits.

Among HONY’s more than fifteen million social media followers are students all over the country and around the world who have already connected with this special type of storytelling, which pairs an impromptu portrait with a personal statement or story in the subject’s own words. HONY: Stories emphasizes those words, featuring hundreds of new portraits with detailed captions that tell humorous, inspiring, poignant, tragic, and above all, human stories. Loosely organized by theme, the book touches on such topics as family, culture, education, poverty and wealth, success and failure, spirituality, individuality—the kinds of things we all consider every day, on very broad or very minute levels. HONY: Stories explores how these big ideas impact our lives at any given moment, on any given day, no matter where we live.

Additionally, Brandon’s ongoing project has demonstrated the positive power and scope of social media. In early 2015, the vast HONY community raised more than $1.4 million to support students at Mott Hall Bridges Academy in Brooklyn after sixth grader Vidal Chastanet appeared on the HONY blog and identified his principal, Nadia Lopez, as the most influential person in his life. This summer, while traveling in the middle east, Brandon explained the cycle of bonded labor that’s pervasive in Pakistan’s brick kilns. He photographed workers who have essentially been enslaved by the practice, and he featured a woman named Fatima who has dedicated her life to supporting and protecting those workers through her organization, the Bonded Labour Liberation Front. The HONY community has raised more than $2.3 million for the BLLF, empowering the organization and renewing Fatima’s hope of one day ending the illegal practice.

What stories would students tell in the hallways, classrooms, dormitories, and dining halls at your university? What experiences, values, and lessons would their portraits capture? Who would they recognize, or what cause would they support by sharing a portrait and a story? Reading HONY: Stories and exploring its many though-provoking facets as a group is one way to find out.

St. John’s University’s previous Freshman Read book selections include Harvard professor Michael Sandel’s Justice: What’s the Right Thing to Do? and Triangle, Katharine Weber’s novel based on the devastating fire at the Triangle Shirtwaist Factory in 1911.

The University of Kentucky has selected Picking Cotton, the memoir co-authored by Jennifer Tompson-Cannino and Ronald Cotton, for the 2015-2016 Common Reading Experience!

All matriculating first-year students will receive a copy of the book from the university when they attend their two-day “see blue.” U Orientation over the summer. Before returning to campus in the fall, they’ll read it and complete a brief assignment in preparation for K-Week 2015, the new student transition and welcome week held just before classes begin. During K-Week, they’ll meet with other new students and upperclassmen serving as Peer Leaders to discuss Picking Cotton.

An initiative of UK’s New Student and Family Programs, Student Affairs, and Undergraduate Education offices, the CRE is meant to introduce new students to scholarly discourse and composition; to provide new classmates with a shared intellectual experience; and to engage the entire UK community around timely and relevant topics through yearlong programming on campus.

Throughout the 2015-2016 academic year, the university will hold events related to the book and its themes and topics: racial dynamics, sexual assault, criminal justice in the U.S., guilt and innocence, memory, and forgiveness.

The University of Kentucky realizes the immediate relevance of these topics for students embarking on their college experience just now in the United States; the university also recognizes that issues like sexual assault and racial dynamics must be approached with great sensitivity. The university has taken care to notify readers that the book may be an emotional trigger for some, especially for survivors of sexual assault. Wherever appropriate, students participating in the CRE are entitled to academic accommodations or alternatives.

Though the book’s complex topics and themes present some challenges for a diverse campus community, this year’s CRE also represents an opportunity for the university to emphasize its policies regarding sexual misconduct, mandatory reporting by UK affiliates, and racial discrimination, harassment, or bias, as well as valuable campus resources like the Counseling Center, the Office for Institutional Diversity, the Office of Institutional Equity and Equal Opportunity, and the Violence Intervention and Prevention Center.

University President Eli Capilouto writes about this, shares information about related resources available on campus, around Central Kentucky, and nationwide, and expresses the importance of the Common Reading Experience to the UK community, in his compelling welcome letter to the newest class of Kentucky Wildcats. Click on the thumbnail at right to read the letter.

The University of Kentucky is one of fourteen schools that have adopted Picking Cotton: Our Memoir of Injustice and Redemption for a common reading program. For more information about the book and about authors, speakers, and activists Jennifer Thompson-Cannino and Ronald Cotton, click here and visit The Innocence Project.

This event is free! (RSVP is required—click here!)

Joshua Davis
author of
Spare Parts
Four Undocumented Teenagers, One Ugly Robot,
and the Battle for the American Dream
Farrar, Straus and Giroux | About the Book

This event is free! (RSVP is required—click here!)

Macmillan is pleased to offer a diverse selection of broadly appealing, critically acclaimed books—all of them suited for First-Year and Common Reading programs.

Macmillan Reads presents news about our top common reading titles and the colleges and high schools reading them. 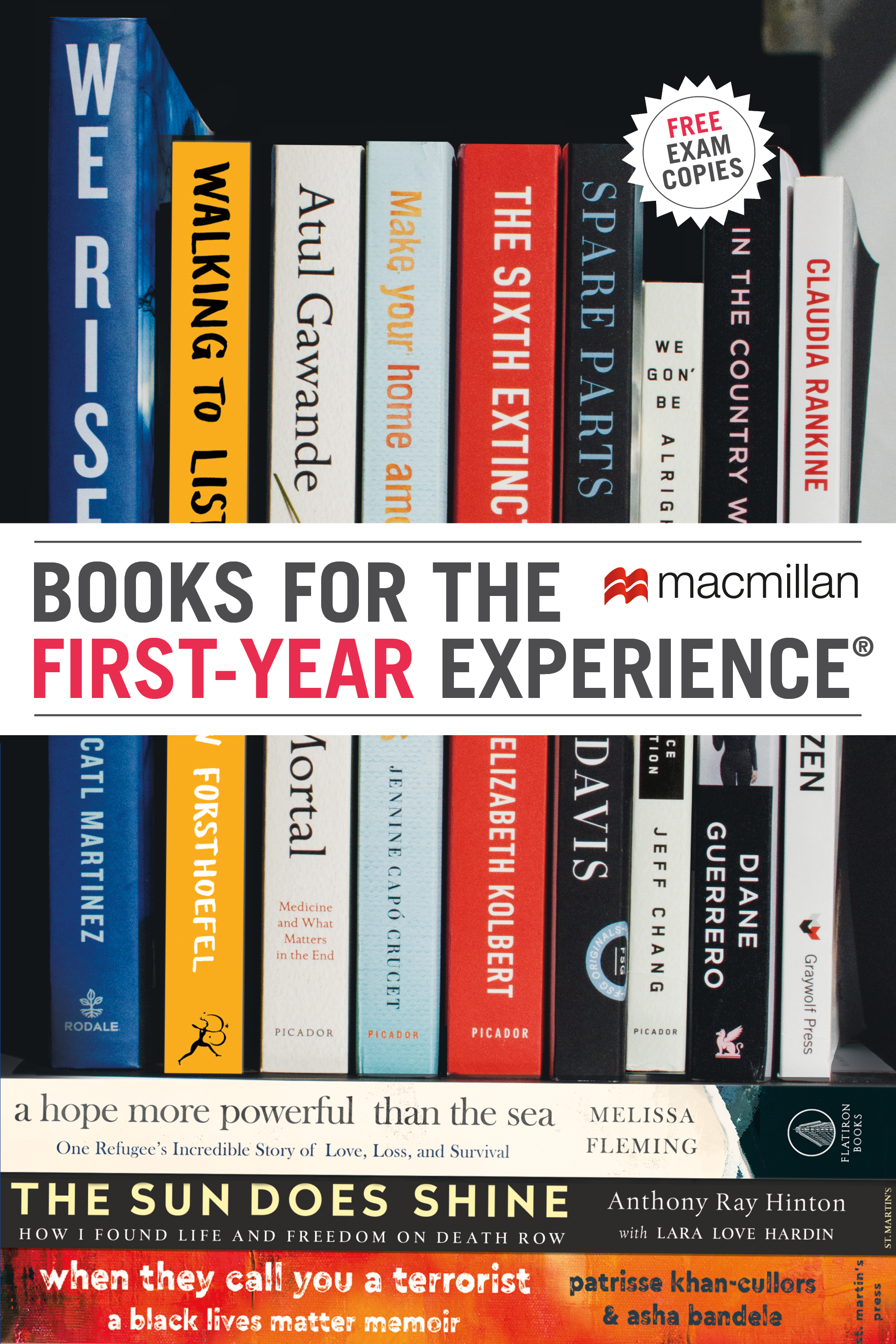 Annual Conference of the Association for Orientation, Transition, and Retention in Higher EducationOctober 27th, 2020
84 days to go.